In 1998, after several years without producing a single FM synthesizer, Yamaha released a new FM powerhouse...the FS1R. This little beast is far from your average FM synthesizer. Not only is it an eight-Operator variant, as opposed to the six- and four-Operator FM of the DX/TX lines, but it also features a new technology called Formant Shaping Synthesis. Formants are the spectral patterns making up the sounds of human speech. This allows for the creation of vocal like timbres but can also be applied in many different ways to create incredibly unique sounds that you won't find on any other synths.

DX7 aficionados will like the fact that the FS1R has almost complete compatibility with 6-Operator FM synths: you can send, via MIDI, a patch from a DX7, for example, and the FS1R will convert it to an identical-sounding patch in the new synth. A lot of the preset Voices actually come from the DX7's library. It's also possible to program sounds from DX7 sound charts, finding an algorithm that has an equivalent layout to the DX algorithm and turning off the unwanted Operators.

The downside to the FS1R is the complexity of the user interface. With a tiny LCD screen and hundreds if not thousands of menus and sub-menus, editing from the front panel is tedious and nearly impossible. Thankfully, there are now software editors available for both the Mac and PC platforms to make the process quite a bit easier (though still not perfect). All that said, the complexity of working with the synth is far outweighed by the amazing sounds that it's capable of. It truly sounds like nothing else out there. From huge evolving pads, to shimmering EPs, fantastic organs, screaming leads and booming basses.. this synth can sound industrial and cold one minute, and then warm and almost analogue the next. With some time dedicated to learning how to edit the patches, or create your own from scratch, there's really no sound that this synth isn't capable of making.

After an abysmal showing on the market, the FS1R was discontinued after only about one year. These days, more people have discovered what this synth is capable of and it has seen a resurgence in popularity and has reached an almost cult-like status. It is rare to find one for sale these days, and when you do, the prices seem to be climbing.

If you have a short attention span and no patience, this may not be the synth for you. If you're someone who doesn't mind programming a synth to get the most out of it and you're looking for some of the most amazing and unique sounds ever produced by an FM synthesizer, the FS1R is a must have. It has been used by Squarepusher and Sin. 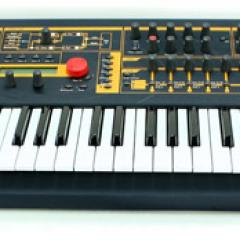