Comparable to the W7, the QS300 is a slightly 'lighter' synthesizer and workstation. Up to 32 voice polyphony and a large 16-track on-board sequencer based off the QS300 MIDI sequencer. The sounds are quite good, generated from Yamaha's AWM2 analog modeling method, this synth has become a favorite of Ravers, Techno and Trance producers and DJs. The standard GS, GM sounds, and some of the pianos are not special, but they aren't what this synth is about! The technology from this synth was later passed on to the AN1x and the CS1x. The QS300 has a large LCD for viewing and selection of status, effects, preset voices, rhythm patterns, chords, and more. It's full of hundreds of sounds including 22 drum kits. It has a disk drive, Swing effect, Quantize, MIDI controller, Extra DEMO disk, XG compatible...an impressive workstation for the price. 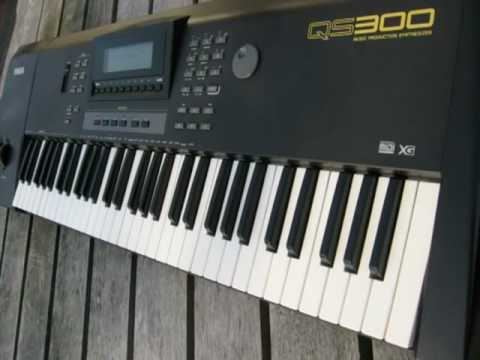