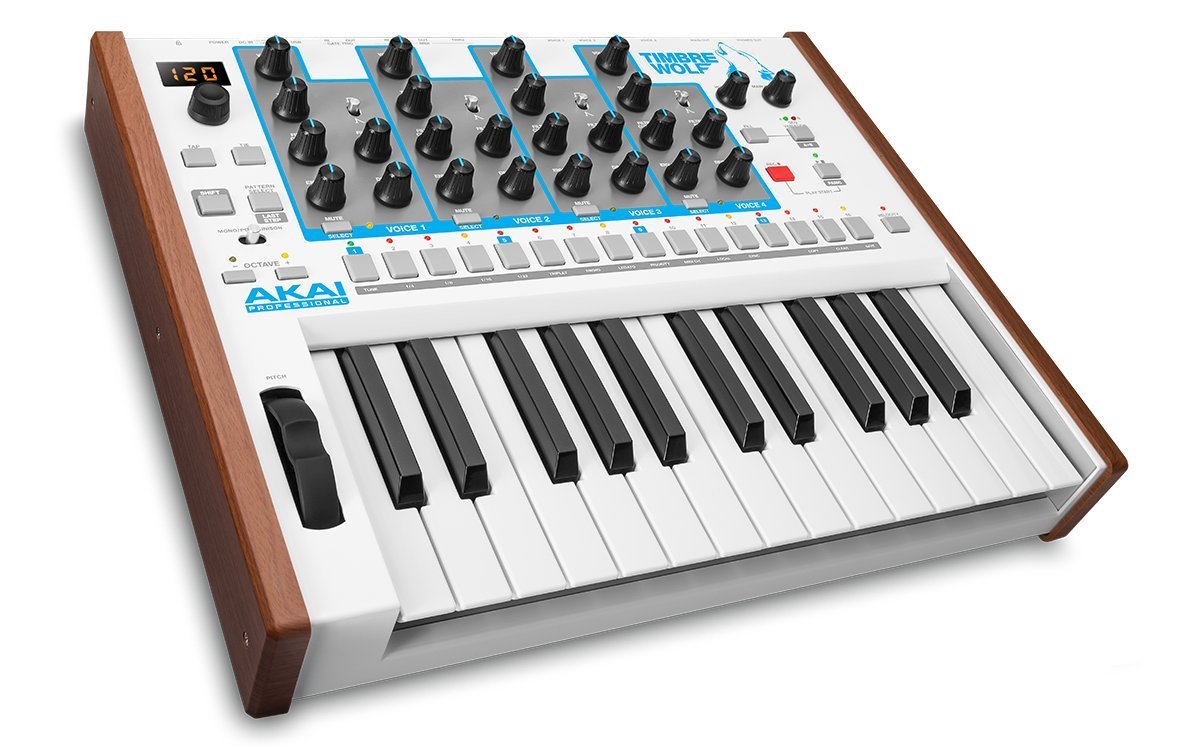 The Akai Timbre Wolf is a four-voice, D.C.O, analog synthesizer notorious for its head-scratching voice architecture, eyebrow-raising sequencing capabilities and the jaw dropping lack of response one finds when tweaking it's deceptively generous collection of front panel knobs. However, in a classic case of "the whole being greater than the parts," the Timbre Wolf's smooth DCO oscillators and off-beat functionality, in an increasingly conformist synthesizer market, have caused many to change their minds about this oddly-charming device.

The Timbre Wolf was unleashed on the all-to-suspecting public at N.A.M.M 2015 in a legendary product demo, that is best described as the Hindenburg of Synthesizer debuts. The public was already out for Akai’s blood after their analog drum machine/bass synth, The Rhythm Wolf, released a year prior, had been sent to market with its oscillator pitch increments improperly scaled and thus unable to properly produce pitch and a kick drum that was unusually murky.

A firestorm of online venom had been directed at the company, who had already started production on a separate product featuring 4 of the Rhythm Wolf’s synth voices. The release was delayed to let the vitriol die down, but it only whetted the public’s appetite for a sacrificial goat (or wolf, in this case.) At N.A.M.M 2015 an obviously terrified and underprepared Akai employee nervously fumbled with the unresponsive Timbre Wolf as thousands mocked from their online vantage points. Commercially, the product was predictably D.O.A with prices steadily falling to below bargain levels, Akai quickly moved on from its ill-fated analog line.

Is the Timbre Wolf deserving of the derision it received upon release? To judge the synth one must first understand its' functions…

.. The Timbre Wolf's lineage can be traced back to 1981 and Korg's "curious" but, for the most part, well-remembered Mono/Poly analog synthesizer. One might even call the Timbre Wolf a modern copy of the aforementioned Korg.

Like the Mono/Poly, each of the Timbre Wolf's four voices is addressed individually via a channel strip of controls for that voice only. Volume, Tune, Filter cut-off and Envelope amount (Filter envelope) are the parameters offered for tweaking.  It also comes equipped with a wave-shaping switch that toggles between saw and square. From there, the user could let the voice move through a shared overdrive circuit (amount of overdrive is controlled by a single knob destined to be the butt of 10,0000 punchlines, Akai's ubiquitous "howl" knob) and on through the synth's final shared VCA to its monophonic balanced output jack. Akai claims the main out to be balanced TRS +4, however many users have claimed this NOT to be the case.  In comparison to its sister products, The Rhythm Wolf and Tom Cat drum machines, which play audio over both the "+ and -" of a TRS connection, the Timbre Wolf only plays audio over the "+". This leads to speculation that there may be manufacturing differences and that not all units are identical, so take care in assessing the output's behavior should you find yourself using one.  One also has the option of using a direct, pre-overdrive, individual output which Akai has supplied for each of its four voices.

This is where things get interesting, as one understands that the Timbre Wolf can function as four independent monophonic synthesizers, each with it’s own output and MIDI channel, one Polyphonic Synthesizer (where each voice, unfortunately, must be addressed on it’s own MIDI channel, thus polyphonic playing from a controller becomes cumbersome) or as one four oscillator mono synth addressable on one MIDI channel (which leaves three other MIDI channels open for external sequencing) These modes are easily selected via a front panel switch.

Additional sound shaping and sequencing perks include each channel having its own 16-step sequencer with an additional B pattern, which can be run sequentially, thus creating a 32 step sequence, there is also a fill (Variation) button. This provides access to an alternate sequence for the A and B sequencer patterns, allowing the quick of hand (fill patterns must be triggered manually) access to four 64 step XOX style patterns for controlling the internal voice. Also, in monophonic mode, the sequencer will rotate through the voices "Round Robin" style, as each voice's sound can be dialed individually. This can produce some interesting sonic variations, not the least of which is a 303 substitute.

There is variable swing, note ties, triplets, extensive voice priority settings and an “Auto-tune” function to calm the fears of any Rhythm Wolf owners. There is also a Pitch bend wheel that disappointingly travels a full tone and no further.

The Timbre Wolf has been criticized for the lack of response it’s onboard controls provide, the tuning knob is useful only for detuning in unison mode as intervals cannot be achieved via its use. Further to this, the filter cut-off knob, when nearing its apex, seems to drop the overall volume below a usable level.

But in spite of its controversial birth, a commercial failure, and initial criticism, few have ever said that it is a bad sounding synthesizer. Most agree its raw tones are quite pleasing and that it harkens back to some of the more obscure synthesizers of the 70’s.

What esteem, if any, the Timbre Wolf achieves in a historical sense will not be known for many years. What is known is that, if you don’t mind a bit of a challenge and are willing to try and do a lot with a little, then the Akai Timbre Wolf may hold some appeal for you. However alluring this challenge may sound, it would be best for most for most of today’s synthesizer market to understand that this instrument will most likely not provide them with the type of modern sounds they are looking for and they would do well to demo it prior to purchase. 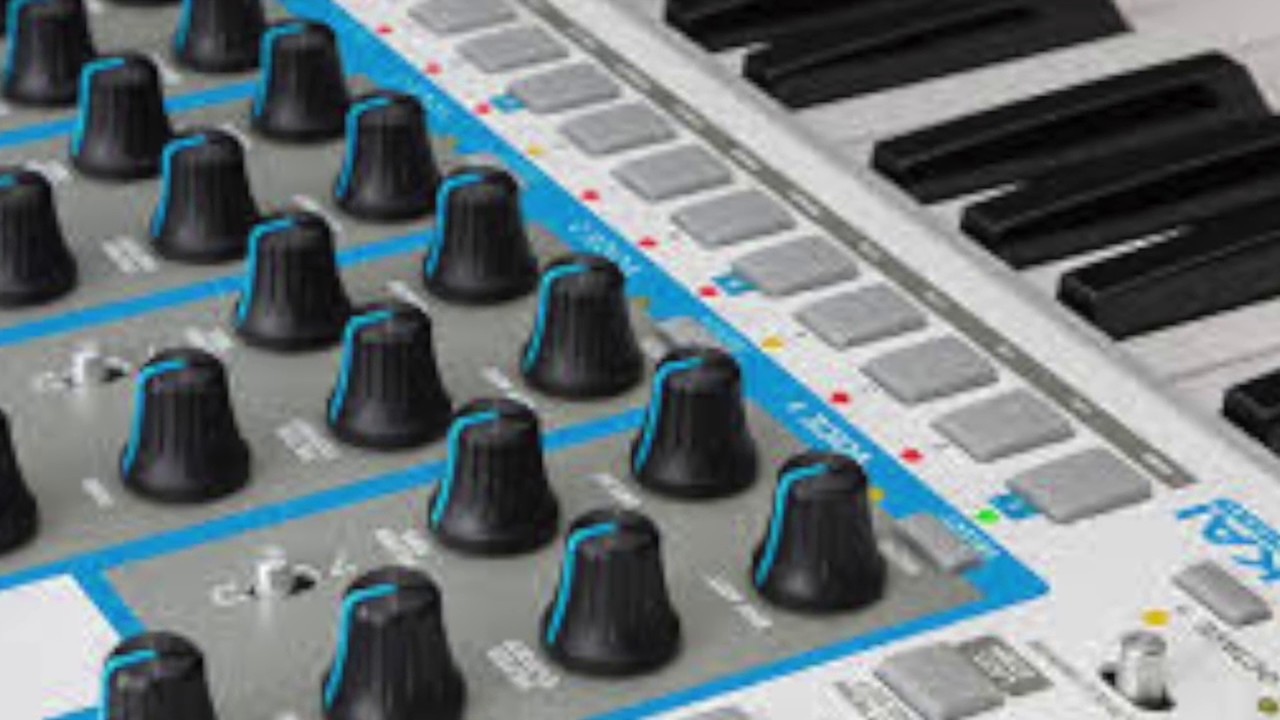