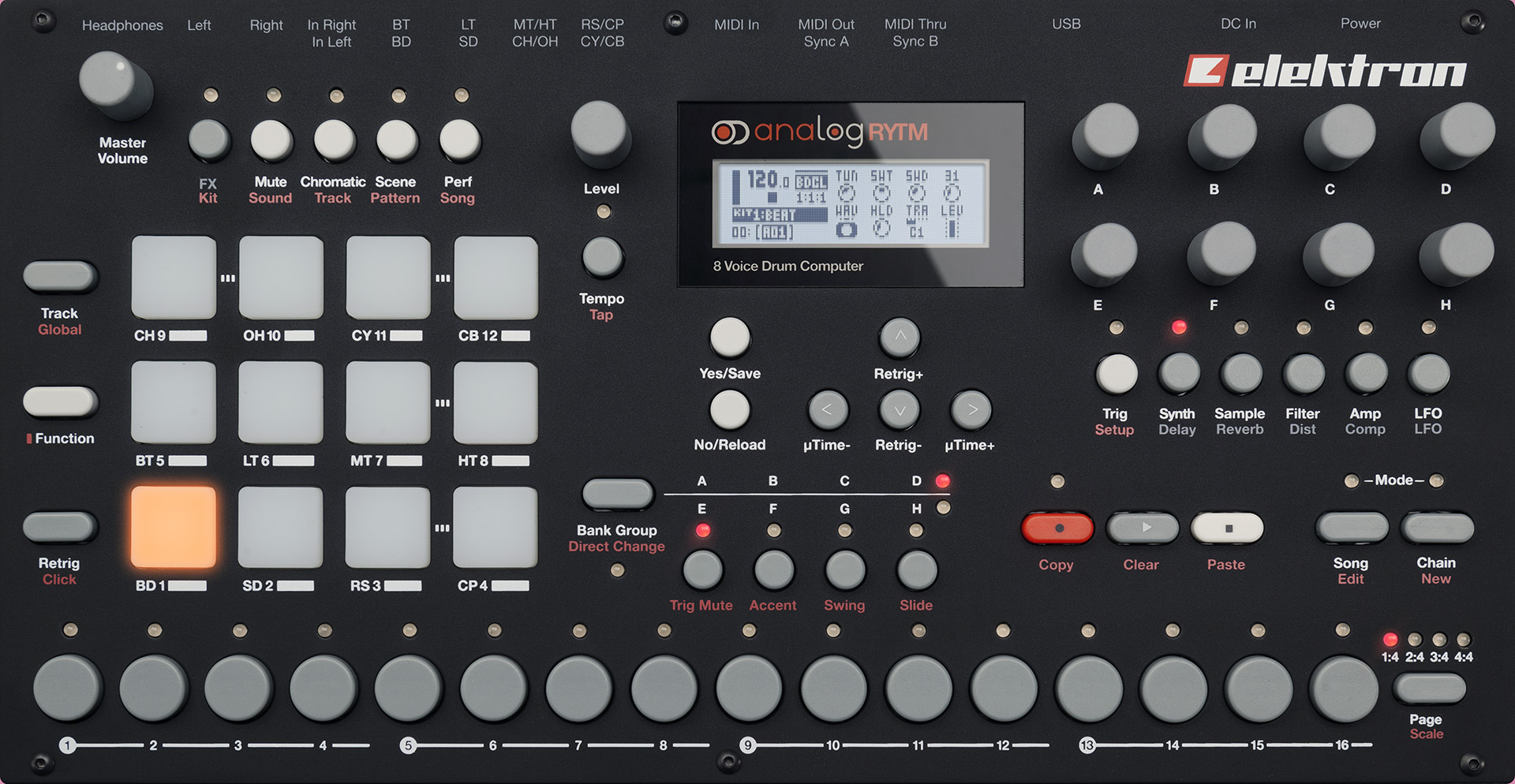 With the analog resurgence, we've seen several simple analog drum machines released already, and many of them sound really good, even if functionality is limited. It wasn't until the Tempest hit stores in 2011 that a true analog drum synth became available. Meanwhile, Elektron shifted efforts from their expertise in sample-based and digital products to analog with the Analog Four. So the announcement of plans to release an analog drum machine in 2014 wasn't necessarily a surprise, but it was certainly welcomed with anticipation among the analog-hungry.

Elektron have delivered not just an analog drum machine but a true analog drum synth. In some ways, it's similar in concept to the Roland 808 or 909. Each sound has its own engine and a 16-step sequencer. But this is 2014 so the capabilities go far beyond that--with an analog engine augmented by a sample slot for sonic territory that extends far beyond most analog boxes.

Each sound is associated with a pad that you can play in real time and record with--quantized or not. The pads are much smaller than those on an MPC so they might take some getting used to. But they feel solid and are velocity-sensitive. The engine and available parameters of each sound depend on the sound. For example, the Bass Drum has 2 oscillators and "snap" and "tick" parameters while the Cymbal has 6 oscillators and a noise color parameter. In some ways that is limiting if compared to, say, the Tempest's carte blanche approach where each voice can be patched as desired. But Elektron's decision is true to the old school approach of voicing each sound differently, and it means that, unlike the Tempest, there is an analog noise source and up to 6 oscillators per voice. And the Rytm goes far beyond the limits of an old school drum machine; you can make your snare sound like a tom or like a glitchy insect with just a few parameter changes. If the analog engine still doesn't supply enough versatility, each sound supports one sample which can replace or be combined with the analog engine. The sampling capabilities are nothing like those of some of Elektron's other offerings. There's no way to see the waveform, for example, but the loop, bit rate, and other sound engine parameters do provide for a fair amount of versatility for something that's essentially an extra. There also aren't a lot of samples to choose from, but packs are available on the Elektron site as well as from other sources.

Changing parameters is straightforward with a small but clear display screen. All voice parameters are edited with soft encoders which are fluid and show no signs of stepping. Each parameter page (Synth, Sample, Filter, Amp, LFO) is easy to navigate with only a few esoteric abbreviations due to space constraints. The global FX pages work in the same way and use a bus on each sound's amp page for each sound to share the respective effect or be left completely dry. Sounds are saved in kits, and with memory for 128 projects and 128 kits per project, storage shouldn't be an issue. But the USB port should help with backup, as well as loading samples.

Sound-wise the Analog Rytm can tend to be modern, and the DCOs don't have the organic feel of an 808, for example. The sound tends to be a bit clean--until you start adding some overdrive to your sound. The overdrive is before the filter and beefs up the sound source to really get more aggressiveness from the filter. If that's still not enough, even just a hint of distortion adds enough harmonics to make a track as old school or grungy as you want. And being able to get that sound as well as a fully compressed version of it out of one box is a delight. There is an audio output per voice but the stereo outs are often all one would need for a fully realized, properly compressed drum track.

Some drum machines are intended more as real-time performance tools, other as studio tools to be programmed. This is a machine that can be straight-up sequence-and-hit-play or a hands-on performance tool. The 16-step sequencer will be familiar to users of old school gear or simulations of it. The steps can be extended to 64 steps, various time signatures are supported, and swing levels add a looseness not found on those old units. The Rytm can also be set up to record the beats tapped out on the pads in real-time. Copying/pasting make programming that much simpler.

For more set-and-forget studio magic, Elektron has integrated parameter locks (a.k.a. P-locks), which allow the user to tweak a parameter and record the value which is locked for that step. So you can have a low tom be a high tom on just one step of the sequence--or bring in delay just for one beat, etc. Adding even more versatility, there's sound lock which lets you swap one sound for another for the step you choose. Finally, parameter slide lets you lock in some organic glisses and glitches.

For those more into performing rather than programming, there are modes to choose from to enhance your song. Mute mode lets you mute sounds on the fly. Chromatic mode lets you play the pads as a keyboard--providing there are oscillators or samples that support that--and you can even get some decent bass or lead tones. Two more expressive modes are Performance and Scene. Performance allows control over multiple parameters by pressing a pad harder or softer. Scene mode is a set of 12 scenes each of which is a collection of parameter locks. Performance and Scene modes take a bit of planning and setting up but they are well worth it for a dynamic performance.

In addition to all of the onboard features, Elektron has announced Overbridge, which promises to integrate the Analog Rytm with your DAW, support bi-directional audio streaming, and allow full VST control.

All in all, the Analog Rytm sounds and feels like exactly what it is--an analog voice with a digital brain. Classic electronic drum sounds are in there along with new analog drum sounds to be discovered. The digital brain not only makes it a suitable center for a modern studio, it also gives it the sonic and functional flexibility of a contemporary drum machine. 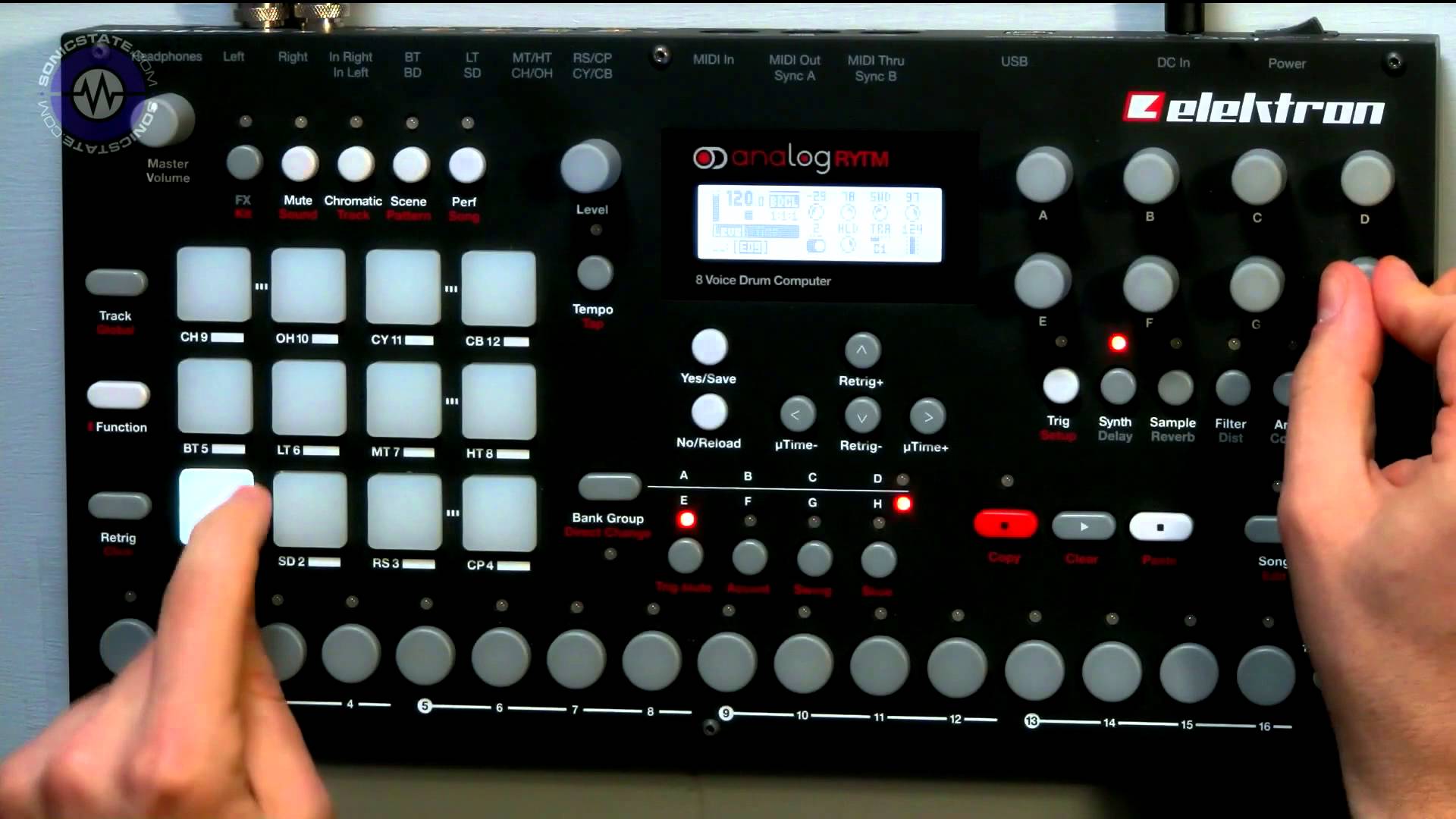