The EX5 features a unique Extended Synthesis system which incorporates a number of the most advanced tone generator technologies currently available...plus a full-featured sampling system. It offers a Four-Element Voice structure which allows for up to four independent waves from any of the tone generators. The tone generators implemented here include AWM2 (Advanced Wave Memory) Synthesis, AN (Analog Physical Modeling) Synthesis, FDSP (Formulated Digital Sound Processing) Synthesis and Virtual Acoustic (VL) Synthesis. According to Yamaha:

FDSP adds a sophisticated note-dependent effect processor to the basic AWM synthesis system. In contrast to a stand effect stage, the FDSP synthesis stage uses individual note and velocity data to control effect parameters, thus making it possible to simulate the characteristics of a number of real-world musical components, as well as produce totally new effects. FDSP can produce totally new sounds that are responsive and "alive". FDSP voices have from 1 to 4 AWM elements with an FDSP stage between the elements and the main effect stage. The FDSP stage can be applied to any or all of the AWM elements used, as required.

Yamaha's Virtual Acoustic ("VL") Synthesis tone generation system applies sophisticated computer based "physical modeling" technology to musical sound synthesis, accurately simulating the very complex vibrations, resonances, reflections and other acoustic phenomena that occur in a real wind or string instrument. VL voices can have 1 VL element and from 1 to 3 AWM elements. The VL element can be used alone to emphasize the full realism and expressive power of the VL tone generator, or with added AWM elements for thicker textures.

The EX5 allows the AN and FDSP tone generator systems to be combined in "AN + FDSP" voices which can have 1 AN element and from 1 to 3 FDSP elements. The FDSP stage can be applied to any or all of the AWM elements used, as required."

The EX5 also features sophisticated sampling capability. Samples can be used in AWM voice elements or mapped to and played via individual keys of the keyboard using the Key Map mode. It is also possible to sample internal sounds created in the EX5. The Sample mode has all the features you'd expect from a professional sampler and is compatible with WAV, AIFF and AKAI formats. Sampled waveforms can be saved to floppy disk or to an external storage device via the optional ASIB1 SCSI Interface.

The EX5 is also available as a rack-module, the EX5R.

The less expensive EX7 is a "lite" version of the EX5. It has a smaller 61 note keyboard and has no "VL" synthesis nor "AN + FDSP" mode. However, the EX series represents a giant leap forward in synthesizer technology from Yamaha!

There is apparently a limited edition version of the EX5 that was either released as a "Millenium Edition", or marked the end of the production line (pictured above). It was only available in the Aisian market, so picking one of these up in the states would be a very rare find! Supposedly, only 2000 of these were slated for production, but only around 500 of them made it off the production lines. All of the specs of the EX5s are exactly the same as the EX5 except the EX5s is in a silver housing. 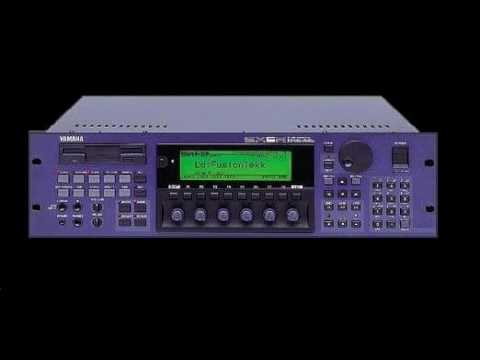 Images from keyboardsrecording.fr, Perfect Circuit Audio and this EX5 page.