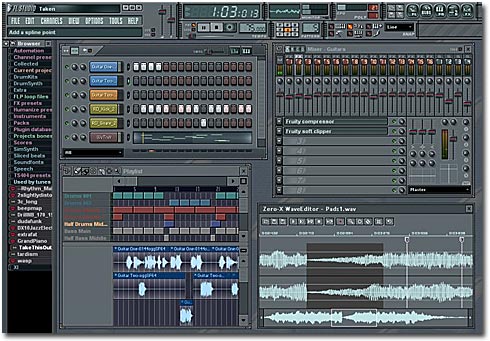 FL Studio (formerly Fruityloops) is Image-Line's all in one software production suite for PC. FL Studio is a pattern based sequencer, which means you create your songs in pieces (patterns) using the Step Sequencer and the Piano Roll view and then weld those pieces together using the Playlist window (the Playlist also supports full-featured audio tracks with hard-drive streaming). Then you can add a wide range of effects to your instruments (reverb, phaser, flanger etc.) and route the resulting mixer tracks in any way you like to create complex mixing chains with ease. The resulting song or loop can be exported to a WAV/MP3 file and all MIDI events can be exported to a standard MIDI file.

Here is a brief review of the history of FL Studio (formerly Fruityloops):

FL Studio (formerly FruityLoops) for the PC has been called the ReBirth killer, and with good reason. At first glance it looks like a software-based Drum Machine, but look a little closer. It functions like a drum machine because it is a pattern based sequencer, just like Rebirth. However, more than just drum sounds can be assigned to each 'channel'. Loops, bass, synth sounds, effect sounds and samples can all be assigned to an unlimited number of 'channels'. Creating patterns is as simple as in ReBirth or any drum machine in which you set a tempo, start the loop and punch in your sounds.

The reason one might consider FL Studio a ReBirth killer is that it offers plenty more edit-ability of individual sounds and is more programmable than the latter. In addition to panning, volume, pitch and mix controls you'll find effects, envelope, resonance, cutoff, cut, reverse and more! FL Studio also sports the new TS-404 synth section to rival that ReBirth 303 sound. It also supports plug-ins, skins, external MIDI control and up to 64 notes per pattern.

Some additional features include an integrated BeatSlicer, live wheel recording of all wheels, unlimited number of channels (not just 8), support for 8 (VST&DX) FX tracks, integrated sample browser, cool effects to alter the samples, playlist allowing to mix several patterns, it can now act as master clock for sync, sends start / stop / clock / SPP. If you loved ReBirth, you'll certainly be interested in FL Studio. With it you can make ultimately more unique and different sounding music, rather than something that sounds like it was made on a ReBirth! FL Studio is being used by Mike Oldfield, Hellfish, Dan Hekate, Somatic Responses, Heretik, and Sonic Belligeranza.

FruityLoops version 3.4 adds SoundFont support and the Fruity DX-10 FM Synth add-on. Additional new features include Layer Channeling, Channel Filtering, Project Bones Export, and many more refinements. The upgrade from version 3.3 to 3.4 is free and downloadable for owners of the on-line version. However, the SoundFont and Fruity DX-10 FM Synth add-ons will cost $35 and $19, respectively. 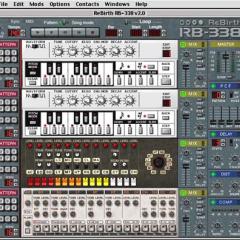 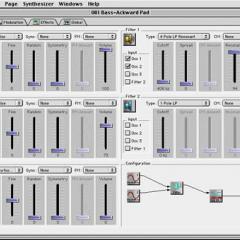 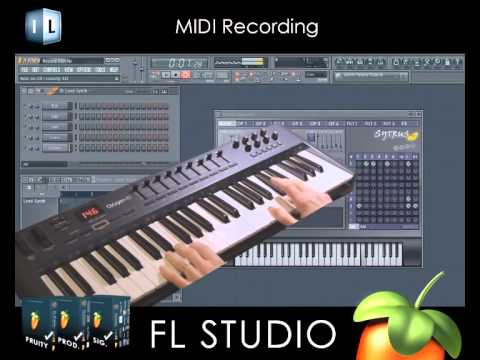 Image-Line | What Can FL Studio Do?
by
imageline