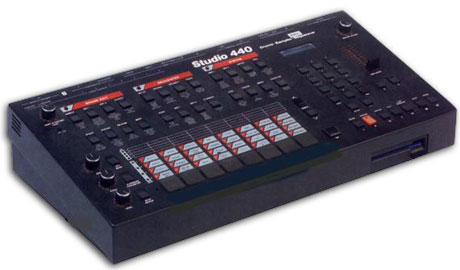 The Studio 440 is like the Grand-Daddy of Sequencing/Sampling Drum and Music Production Machines. You may have heard of the Akai MPC60, MPC2000, MPC3000 and E-mu SP1200 machines. Although some of these exceed the limits of the Studio 440, it is still very much worth checking out! The major difference between the modern Akai MPCs and the Studio 440 is that its sampler is 12-bit. A little lo-fi in comparison to the 16-bit MPC. The Studio 440 also has a slim 520kb memory so you won't have much time to sample anymore than some short percussion and drums.

Similar to the MPC60, the Studio 440 has an analog lowpass filter which is always fun. Unfortunately it is not resonant. The Sequencer is intuitive and quite functional with a capacity of 50,000 notes, 8 separate tracks and a swing function. But unlike its contemporaries, the 440 has some visionary features for its time. MIDI data from the sequencer can be transmitted out so that it can play external MIDI instruments. There is also built-in SCSI for external drives and storage.

The 440 is pleasant to look at, even today. It's simple to use and sounds pretty darn good despite its lo-fi 12-bit sampler. Though an MPC is likely a better buy than the 440 these days the 440 still commands quite a high asking price. It was, after all, one of Sequential's last products. It was way ahead of its time and was also very hip! They are rare and difficult to have serviced - what else would you expect from a Vintage instrument!

Audio Clip 1 This is an original demo of the Studio 440 with its typical sounds and a ReBirth 303 acid-line (to spruce it up).

Thanks to Johan Sahlberg - F L Y H for providing some information.