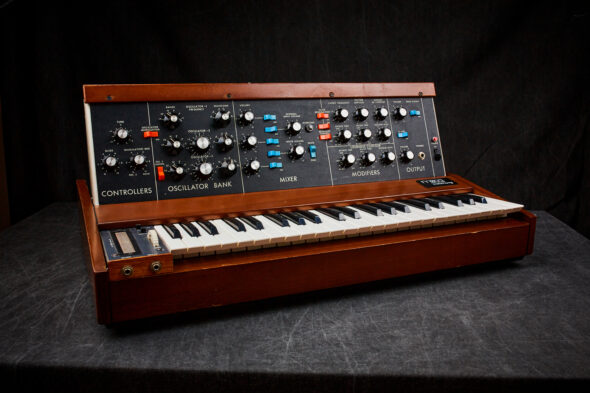 The Bob Moog Foundation has recently announced that with the start of August, they are also kicking off their annual summer synth raffle. The prize for this year is a fully restored vintage Minimoog Model D signed by the legendary Billy Joel.

The raffle started on August 1, 2022, and is ending on August 31, 2022, at 11:59 p.m. ET. If all 5,000 raffle tickets sell out before the end date, the raffle will also be over. What makes the Minimoog Model D extra special is that it isn't just signed by Billy Joel but actually belongs to his musical director, David Rosenthal. David is a musician of note in his own right who has toured with the likes of Enrique Iglesias, Cyndi Lauper, and Robert Palmer. He has also programmed synths for Bruce Springsteen and worked with the likes of Steve Vai, Red Dawn, and Happy the Man.

As for the Minimoog Model D itself, it has a serial number of 8486 and was final-tested on January 17, 1977. It was used by David Rosenthal as part of his early '80s Rainbow touring rig and even includes the original road case he used in those days. Over the years, the Minimoog was customized, and the left-hand control panel was modified to use a ribbon controller and modulation wheel. This feature is identical to that of a Micromoog, but Rosenthal also preserved the original left-hand controller featuring the standard pitch and modulation wheels. According to the Bob Moog Foundation, they will send it along with the synth to the raffle winner. Along with the pitch ribbon update, this unit also has the version 3 oscillator update, which was a special order option for owners of earlier production units who wanted rock-solid tuning.

The Bob Moog Foundation estimates that the instrument's value is more than $10,000, and that's without the signature of a celebrated musician taken into consideration. It was fully restored by Synthpro Restorations and, besides some minor physical flaws due to the instrument's age, is in excellent technical and physical condition.

The Executive Director of the Bob Moog Foundation, Michelle Moog-Koussa, stated that they are proud to share this vintage Minimoog and extend their deepest thanks to Billy Joel and David Rosenthal for their participation. She praised Joel as a truly legendary musical figure who integrated the Minimoog into his music and performance decades ago. In addition, she mentioned that the unique provenance of the Minimoog up for raffle makes it a collector's item and one-of-a-kind synthesizer.

Tickets for the Summer 2022 Minimoog Raffle - Signed by Billy Joel is available now from the Bob Moog Foundation website (https://bobmoogfoundation.myshopify.com/products/summer-2022-minimoog-raffle-signed-by-billy-joel). Tickets are $25 each, but can also be purchased in quantities of 5, 12, and 35 for a discount. The raffle is open internationally, and the winner will be announced on Wednesday, September 7, 2022. As always, all proceeds from the raffle benefit the Bob Moog Foundation's educational project, Dr. Bob's SoundSchool, as well as the preservation of the Bob Moog Foundation Archives and Moogseum.

Check out the video below to hear what David Rosenthal has to say about the Minimoog and to listen to it in action.