The rare Steiner-Parker Synthacon is a portable 3-VCO monophonic analog synthesizer that rivals the popular Minimoog with its fat tone, durable construction and stable, stable tuning. The Synthacon has the same circuitry as the modular SynthaSystem. Interestingly, the Synthacon's filter can self-oscillate like the Minimoog, but has an opposite polarity so it doesn't lose any volume when resonance is increased as do the Minimoog and Odyssey's filters.

Each of the Synthacon's 3 oscillators can be modulated by a variety of sources: LFO, EG1, EG2, VCF, sample-and-hold, and other oscillators. White and Pink noise make for brilliant ocean/wind sounds. The filter is a multimode resonant beast switchable between high, band and lowpass filtering. It can be used to filter each of the oscillators and the noise gens. The shape of the filtering can be controlled by EG2, sample-and-hold, VCO3 or the keyboard. The voltage-controlled amp can control the oscillators, noise and filter. And there are (2) envelope generators which can control the VCA, oscillators, noise and filter.

Earlier models of the Synthacon had silver-faced front panels. Later a duophonic upgrade, the "Two Voice Synthacon" was released. The Synthacon has been used by Earth Wind and Fire, Joe Walsh, the Doors, Frank Zappa and John Paul Jones. 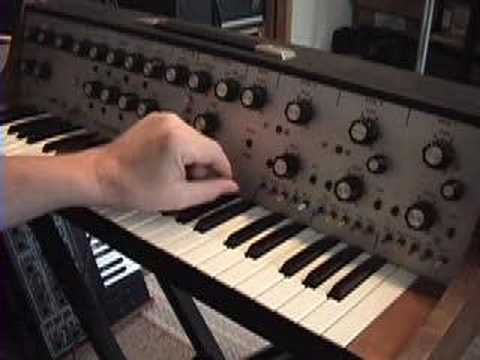