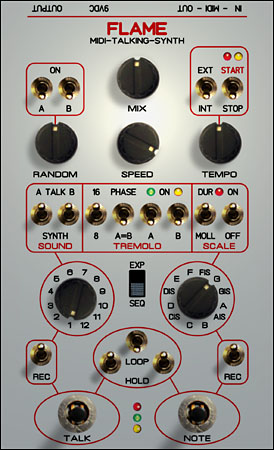 The MIDI Talking Synth is a 2007 release by the German company, FLAME Electronic Musical Instruments. However, the heart of this synth is two analog Speakjet chips, which were produced by a United States company called Magnevation LLC. What is unique about this approach is that these chips were originally intended for robotic voices and not synthesizers.

The MIDI Talking Synth is not just very sturdy but also features a number of controls. For the design FLAME opted to use a combination of switches and joysticks along with a few dials. In total there are two joysticks, 4 knobs, two rotary selectors, and 18 switches. On the back panel, you'll find the MIDI IN and OUT as well as the main analog signal Out. The whole thing is powered by a 9v DC adaptor.

The MIDI Talking Synth can be used in "Sequencer" or Expander" modes. Sequencer mode is for users who want to get hands-on with the unit by using the talk joystick to manually trigger sounds. While one joystick is used to trigger individual sounds, words, or vowels the other can be used to adjust the pitch. For those who prefer to use the synth via MIDI, there is the Expander mode. In this mode, words can be triggered via a MIDI controller. This mode is useful for shaping words more specifically as the pitch and speed can be altered in MIDI mode. The MIDI Talking Synth was quite a novelty for its time and the retro tones that can be coaxed out of it still sound great. It's not an easy instrument to use, but with a bit of practice, the results can be pretty interesting. However, even for its time, this synth was more of a novelty than a serious instrument, which in conjunction with the relatively high price meant it was not an impulse purchase. In addition to the synthetic robot voices, the MIDI Talking Synth can also delver beeps, alarm noises, and other sci-fi sounds that will warm the hearts of all retro fans.

These days it is a lot easier and cheaper to produce the type of sounds that the MIDI Talking Synth delivers using a DAW or software and it is not exactly an instrument that fits in with an ordinary workflow. However, as a novelty item or something unique that you won't find everywhere it is a worthwhile purchase if you are a collector and manage to find one for a reasonable price.

just got one of these & can't get it to react to midi. freaking minimal instruction sheet in pretty rough english isn't helping... | Read more...

Just got one of these yesterday. It is smaller than I thought it would be and quite quirky. I bit expensive for what you get, but the build quality seems ok. It is very pretty machine in a w... | Read more... 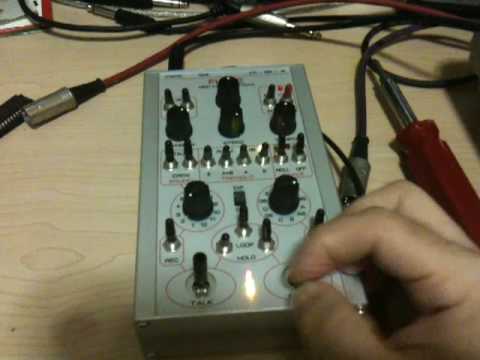