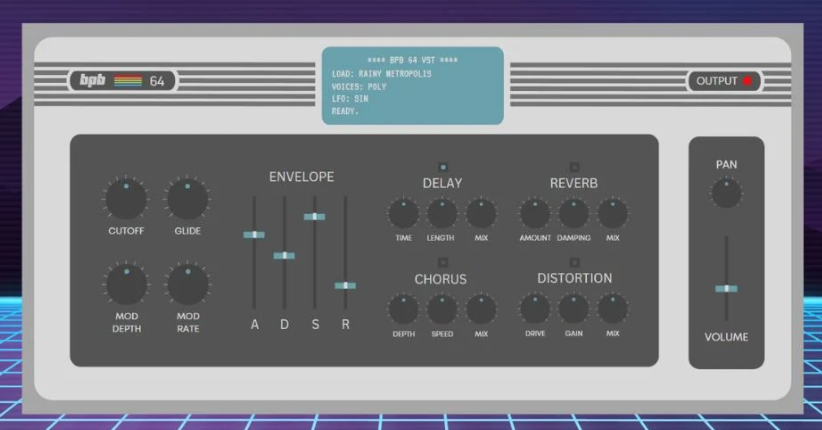 The season of giving is over, but there's still some time to pick up a few new softsynth-related releases for free.

Bedroom Producers Blog released BPB 64, which is a sample-based virtual synthesizer for users who want the legendary sounds of the Commodore 64 in their DAW. The patches included with BPB 64 were all sampled directly from three different C64 units, all of which had different SID chips.

The creator, Tomislav Zlatic, revealed in a blog post that he used the MSSIAH cartridge to program the patches and trigger the Commodore 64 via MIDI. He added that users of BPB's free Commodore 64 Synthesizer Sessions DELUXE library for Kontakt should already be familiar with the sounds but that the BPB 64 plugin takes things one step further. This was accomplished via built-in effects as well as some clever Maize Sampler programming by SampleScience. So while Bedroom Producers Blog handled the sounds and GUI design, it was SampleScience that turned the concept into a usable VST/AU plugin.

Included with BPB 64 are 37 multi-sampled patches covering everything from bass sounds and pads to leads and the distinctive fast-paced arpeggios SID chip fans will remember. Of course, the infamous grit and lo-fi crunch are present, too, as all the sounds were captured raw directly from the SID chip. Users can tweak the presets to their liking using the included low-pass filter, ADSR envelope, delay, reverb, distortion, chorus, and modulation.

BPB 64 is available on Windows and macOS in VST and AU plugin formats for 64-bit DAWs. It can be downloaded for free, or users can donate an amount to help BPB develop more plugins.

Spitfire Audio has released LABS Bell Swarm as a free VST2, VST3, AAX, and AU plugin, which means it can be used directly in any DAW and does not require Kontakt. According to Spitfire Audio, Bell Swarm offers a "joyous assortment of vibraphones, glockenspiels, and hand bells that were all recorded in a breathtaking medieval church. This plugin allows users to create cascading layers of tremolo with loosely timed swarms or use the versatile single hits for variety. Check out the video below to hear LABS Bell Swarm, and visit the link above for the free download.

A "Decent Sampler” version is also available with the same sounds as the plugin version but with different effects and sound-shaping capabilities. It is a free sampler VST/VST3/AAU/AU/AUv3 that is compatible with Windows, macOS, Linux, and iOS.

In addition, Sample Science has made a Kontakt 5/6 version of the plugin with amplitude and filter ADSRs as well as reverb. It is only compatible with the latest updated full version of Kontakt 5/6. Listen to the audio demo below and then visit the link above to grab a free copy of Taiko Drums.

Finally, anyone interested in some fun nostalgia will appreciate the collection of Texas Instruments Speak & Music samples that is available on the Internet Archive. Reddit user channelmaniac posted that they used an AI Synthesis Mixer module to lower the TI Speak & Music output while using Sony Sound Forge Audio Studio to record and separate them.

Everything was done with old-fashioned recording of the audio output, so no ROM code was dumped in the making of the samples. The outputs from all the buttons can be found in a zip file where channelmaniac also split out all the separate words from the various phrases output by the unit. Use the link above to download the ZIP file, which can be extracted to use the .WAV files it contains.