Sponsored Post: Peak is a desktop polysynth from Novation, a company with a proven track record in releasing quality controllers and instruments. Novation also has a solid reputation when it comes to synthesizers, but with Peak they have outdone themselves. It is definitely the most high-end product in their range, which obviously means a higher price tag. However, it still offers plenty of value for money, which makes it a bargain when compared to other instruments in its class. According to Novation, the purpose of Peak was creating the best-sounding synth that they have ever made, which is why Chris Huggett, a synth veteran, worked on the design. Having previously worked on the Bass Station, Supernova, OSCar and many other synths, he definitely has the experience and the knowledge to produce something special.

What Does It Offer?

Peak brings a couple of key features to the table, such as analog-sounding, numerically controlled oscillators, along with 17 digital wavetables. Distortion is more than catered for with three distortion points for each voice. You get pre-filter, post-filter and global distortion points in an analog signal chain. In addition, Peak is able to receive polyphonic aftertouch, which gives you the ability to control expression.

Peak has three New Oxford Oscillators for each voice and, using either the NCOs or digital wavetables, it can become a linear FM source. Then there is the comprehensive modulation system with a 16-slot modulation matrix which allows each slot up to two sources out of a possible 17. For an instant one-touch transformation of patches you can use the two Animate buttons on the synth. Also at your disposal are delay, reverb, chorus and an arpeggiator. The greatest difference between the onboard effects of Peak compared to cheaper synths is the fact that it doesn't sound like it was just tacked on. 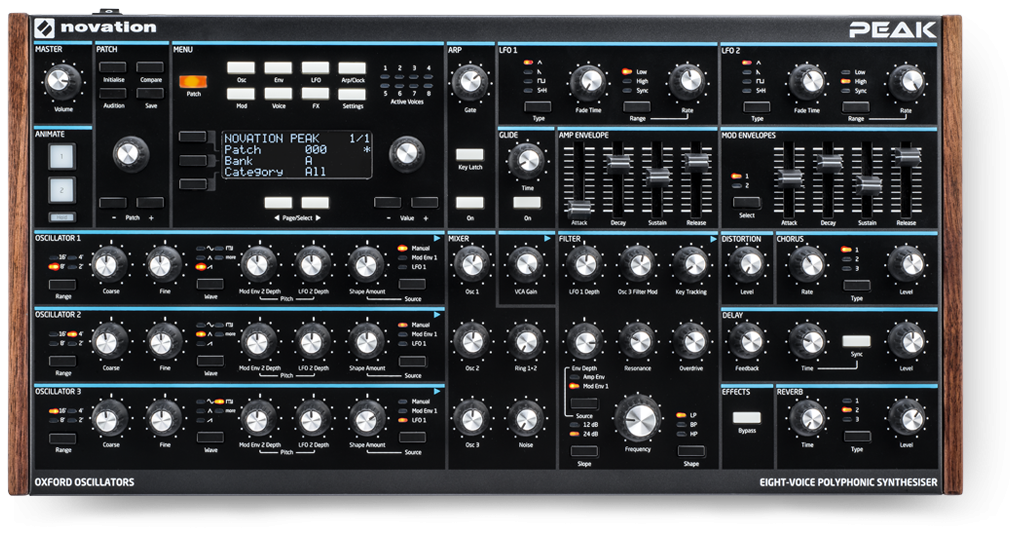 Connect To What You Want

Peak was designed to plug into just about anything, so no matter what equipment you are using, it should be compatible right out of the box. Thanks to its USB port, you can plug it straight into a PC or Mac and start using it. For those who want to connect it to their MIDI gear, the MIDI I/O on five-pin DIN ports will do the trick. In addition, the Peak can use a CV modulation input to connect to modular systems with ease.

Peak has 512 patch memory locations, with 256 factory patches in banks A and B. This leaves 256 user locations available in banks C and D, but you are also free to reorganize these four patch banks just as you like. Peak owners can use the Components web browser, or standalone version, where they’ll find a comprehensive librarian for managing all 512 patch memory locations. Since patches are held in the cloud, they are accessible from anywhere you have access to a USB lead and a browser. In addition, patches can be exported or imported to and from local storage as well if you prefer.

In terms of design, Peak has a front panel that allows for complex synthesis thanks to dedicated controls for key routings. In addition to Osc pitch mod, VCF modulation and other standard routings that are routable from envelopes and LFOs, Ring Modulation and Osc 3 to VCF frequency also have their own dedicated front-panel controls. The OLED screen is particularly nice as it is bright and clear, which makes it easy to browse patches and change values.

The keyboardless design of Peak also cuts down on its physical size, which is a boon to home studio producers with limited space or live performers with an existing setup. By omitting the keyboard, Novation gives users greater freedom of choice in selecting how to trigger Peak without having to pay for something they don’t need. For added convenience, Peak can be installed in an optional angled stand, which is made from die-cast aluminium and offers enough elevation for positioning it above a master keyboard.

The Novation Peak is a very impressive piece of equipment that manages to pack a lot of power and features into a relatively compact design. It is still a little on the heavy side, even though it doesn’t have a keyboard, but its high-quality steel casing also provides sturdiness. It has a lot to offer musicians because of its high resolution oscillators and precision from digital control. Despite being a hybrid, the sound quality doesn’t lag behind that of a full analog synth, which is often a concern. The comprehensive MIDI implementation also helps to make Peak essential for anyone with a DAW setup. While the price tag is a little higher than what is typically associated with Novation products, and it is probably better suited for intermediate or advanced users, the results are definitely worth it.

Disclaimer: This article is a paid advertisement