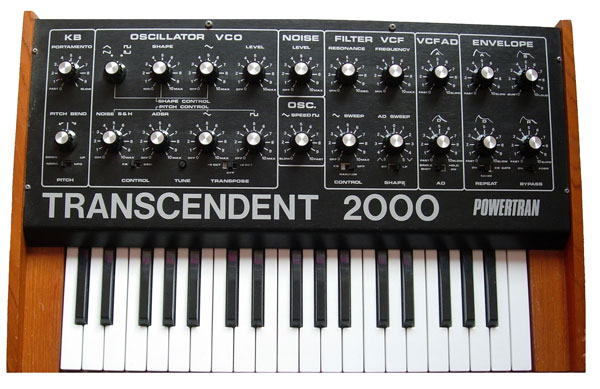 The Powertran Transcendent 2000 was an English synthesizer designed by Tim Orr, also notable for his work at EMS and Akai. In the late 1970s, a good synthesizer was too expensive for many musicians, so Orr conceived the Transcendent 2000 as an affordable kit that could be assembled at home - a similar concept to the one used by PAiA in the United States. According to legend, EMS didn't want their name associated with the varying build quality of a home made synth, hence the kit being marketed by Powertran.

In order to keep the kit cheap to manufacture and easy to assemble, it came in the form of a single PCB that was carefully laid out and accompanied by detailed schematics. Despite this simplicity, the build quality of an individual Transcendent obviously reflects the skill of the assembler. Common problems include a wobbly case, sticky keys, and potentiometers mounted too close to the front panel, making them awkward to adjust. As long as the synth hasn't been bodged too badly, these are all simply remedied by a competent owner.

Even though it was a single oscillator monophonic aimed at the musician on a budget, Orr didn't skimp on the Transcendent's features. The control section sports portamento and a pitch bender (although the original potentiometer lacks a center detent). The oscillator can be switched between a saw or pulse waveform, with an adjustable gradient for the saw, and width for the pulse which can also be modulated by the LFO. Pitch can be modulated by the LFO, or by a sample and hold with the rate controlled by the LFO. There is also a noise generator for more percussive sounds (it also acts as the source of randomness for the sample and hold). The oscillator amplitude can be shaped by a typical ADSR (Attack, Decay, Sustain, Release) envelope generator.

The filter features the usual frequency and resonance controls, with adjustable levels of modulation from both the LFO and a simple AD (Attach, Decay) envelope. Unusually for a low budget synth, the filter can be switched between lowpass and bandpass modes. The filter can produce extremely vicious resonant squeals, and there are even reports from users who have blown up a badly calibrated Transcendent with too high a resonance setting!

Sockets on the back of the synth provide inputs for CV and gate signals, a foot pedal to control filter frequency, and for an external audio source to be fed into the filter. The CV and gate inputs can be a little bit problematic, as the Transcendent doesn't conform to the usual 1V/Octave ratio, and the external gate will only trigger if a key is already held down on the keyboard. These problems can be easily rectified by using a MIDI converter that allows tuning of the CV ratio and by carrying out a simple modification that adds a switch to disable the keyboard when using external control.

Overall, the Transcendent 2000 is a great little monophonic synth, with a character similar to that of the Korg MS-20, but selling for a fraction of the price. The simplicity of the design also allows for some interesting modifications. In terms of famous users, this was the first synth owned by Joy Division, and can be heard on their debut album "Unknown Pleasures". Pictures from the Joy Division recording sessions also show legendary producer Martin Hannett using the Transcendent along with an ARP Omni II. 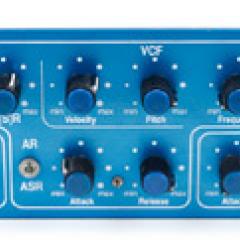 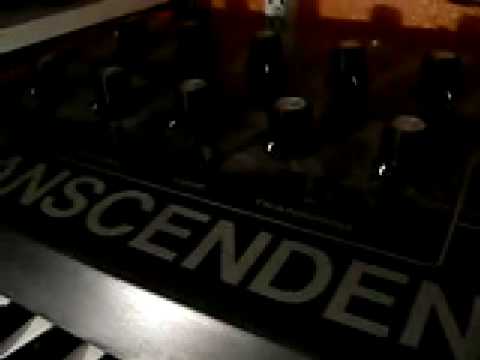 A demo of the Transcendent 2000
by
telecastersteve 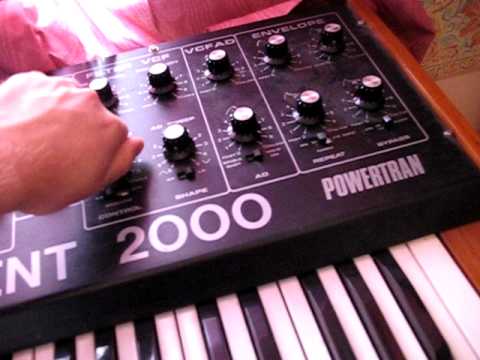 Another demo of Transcendent 2000
by
timer555s

Review and images by Chris Wareham.