The OB-SX was envisioned by designers to be a smaller, lighter, more durable "live performance" version of their (then) flagship OB-X. The OB-SX featured the same VCO/VCF/VCAs of the OB-X and a voice card design similar to the OB-Xa in which polyphony was based on the number of 2-voice PCB cards installed (using CEM/Curtis chips). Sacrifices were made to the OB-X's "knob for each function" programming interface (replaced in the "SX" by a few realtime only filter and envelope controls), the ability to save patches (all sounds were preset in ROM) and the last octave of the keyboard ("chopped" to 48 notes).

Despite the sacrifices, the OB-SX faithfully reproduces the character (and at times the "ill temper" of an all analog design) of the OB-X and OB-Xa. The preset sounds are a bit dated (e.g. early funk & late prog rock), but still usable and the realtime controls allow a good amount of "shaping" to be done. It's important to note that like all Oberheim synths, the OB-SX was a continual work in progress and there were many different revisions made to the OB-SX during its life time. Major revisions included: Early units had 24 presets and mid units had 48 presets and late units had 56 presets (later units had a slide switch on the back to change between banks of presets). The color/case design was changed from the (early units) black & gray of the OB-X to the (later units) black & blue pinstripes of the OB-Xa and OB-8.

Early on Oberheim offered OB-SX purchasers the option of sending in cassette dumps of their OB-X patches and burning them into OB-SX ROMs, so there's the possiblity that the presets in an OB-SX may be unique to that specific unit. Somewhere during production the pre-MIDI "Oberheim System" digital interface was added to the OB-SX, allowing the OB-X to interface with the Oberheim DSX sequencer.

Like all early analog synths the OB-SX is vulnerable to voltage and temperature changes (so make sure you allow the unit to fully warm up and use a voltage regulator/battery backup) and some ICs and replacement parts are now extinct - try before you buy! 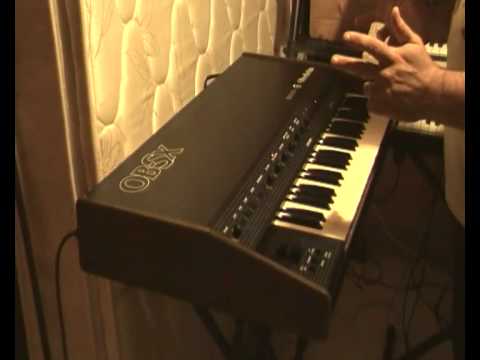