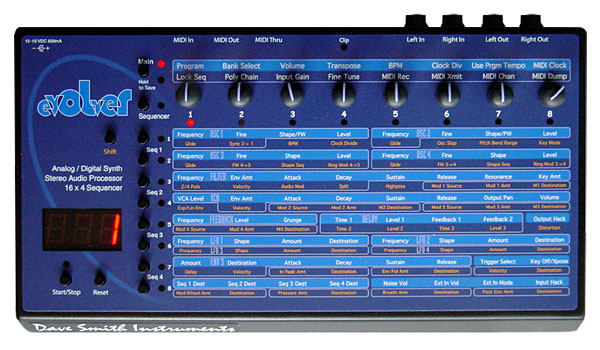 Released in 2002, Evolver is the first instrument to come from Dave Smith Instruments. Dave Smith is considered a legendary figure in the synthesizer world, he founded Sequential Circuits and designed such classics as the Prophet 5 and Prophet VS, and he was a pioneer in bringing MIDI to synthesizers. After a stint working in Software Synthesis for Seer Systems, Dave collaborated with Roger Linn on the Adrenalinn, and then officially came back to the world of hardware synthesizers. And the world was happy to find him back designing synths for a new generation of players - starting with Evolver!

So, there's no keyboard on this thing! Well, it's a hands-on desktop sound module and audio processor. The Evolver is a true analog synthesizer that incorporates many of Dave and Sequential's old secrets, circuits and technologies. It's monophonic with four oscillators - two analog DCOs and two digital - it's a true analog/digital hybrid synth. The analog oscillators feature multiple classic waveforms plus pulse-width modulation and hard sync, and they sound really nice and big. The digital oscillators feature FM synthesis, Ring Modulation and 96 wavetables straight out of the Prophet VS (plus 32 user wavetables, loaded via MIDI software editors such as Motu Unisyn).

One of its coolest features is the MIDI-syncable 16-step, 4-parameter, analog-style sequencer (with each patch able to store its own sequence) which really brings the Evolver to life with animated evolving sounds. The LFOs, step sequencer, and three separate delays can all be synced for massive, rhythmic, time-based effects in stereo. As for programming and tweaking all these functions, Evolver's easy-to-navigate matrix-style interface allows for quick editing and real-time control of 8 parameters simultaneously.

A major unique feature of the Evolver is that although it is monophonic, it has a true stereo signal path. The reason many things come in multiples of two here is because each channel gets its own independent analog oscillator, lowpass filter, highpass filter, VCA and effects. It's sort of like two independent synths - one on the left and another on the right. This allows for pretty nice stereo imaging effects not possible with most other mono-monophonic synths. Some of the factory patches will make your jaw drop - sometimes it's really hard to believe it has only a single voice!

It's no surprise the Evolver was a hit when it came out. There just are no other modern analog-digital synthesizers in its price range, it sounds wonderful, and is one of those synths that has no real need for external effects or sweetening. Evolver literally is a rebirth of the best of Sequential Circuits, updated to meet the needs of today's musicians. The internal computer and DSP chips can be reprogrammed via MIDI, for easy bug fixes, OS updates and feature additions. Other forms of the Evolver that have evolved: Mono Evolver (a keyboard version), Poly Evolver (a polyphonic keyboard version), and Poly Evolver Rack (a polyphonic rack module). 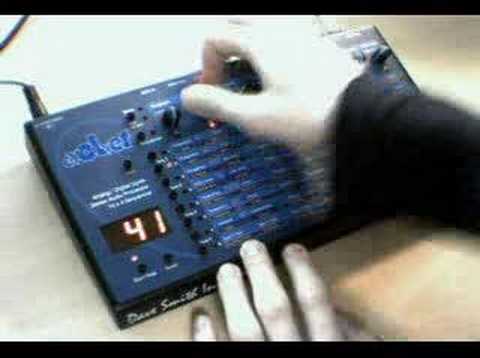