The Korg Lambda is a fully polyphonic 48-key preset synthesizer released in 1979. It features two types of sound - Percussive (Electric Piano, Clavi, Piano, Harmonics) and Ensemble (Brass, Organ, Choir, Strings I, Strings II). The Percussive sounds have a simple fast attack and variable decay envelope, and the Ensemble sounds have both preset and variable attack/release envelopes. Each key is articulated independently, so there is no note-stealing as experienced on synths limited to a handful of voices. The downside of this is the relative lack of programmability, but the presets sound good, particularly when layered (they are all available simultaneously).

The Lambda uses divide-down technology from three Top Octave oscillators to provide the basis for its sounds. The three oscillators are mixed and filtered using fixed circuits to create the preset sounds, but there are also controls on the front panel for basic low-pass filtering of the Percussive and Ensemble tones, and each section has its own volume control. There is also a control for "click" (used to add attack to the EP sound) and a filter cut-off control for the Brass sound, which has its own paraphonic filter - tuned to give a slightly resonant peak to the sound, and with its own preset filter envelope. This re-triggers on every keypress, so held notes will also be reshaped when new ones are played. In practice this is not much of a problem.

An Octave switch puts the keyboard in regular or Octave Down mode. The three oscillators can be detuned to thicken the sound further, and there is a separate analog "chorus phase" (really just a chorus) for each of the Percussive and Ensemble sections. These can be switched on/off independently but share the same sweep control, which is via the joystick on the modulation panel to the left of the keyboard. The joystick also acts as a pitch bend control. Vibrato can be switched off the Ensemble sounds. Percussive sounds feature a variable Tremolo and a Sustain switch that turns Decay into a Release.

Round the back, there are plenty of interface jacks for a synth of this type. Aside from the headphone out, the mono mix out, and the stereo outputs, there is a short-to-ground Keyboard Trigger output, a Sustain pedal input, and an Expression input jack, switchable between Percussive, Ensemble, or both.

The Lambda is a solidly-built instrument, and its large top panel is perfect for laying out some effect pedals and/or a mono-synth. Despite its preset nature, the Lambda is a more versatile synth than it might at first appear, partly due to the quality of its sound, but also the simple yet useful modulation and tone-shaping controls. It really shines through a phaser and some reverb, and is eminently playable. 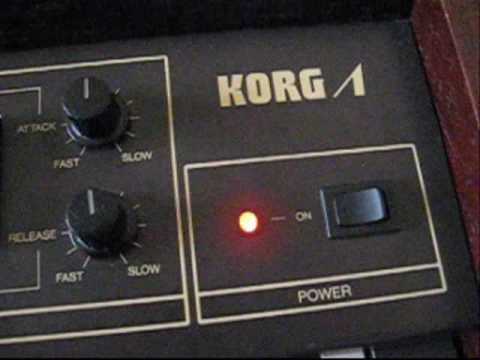 A really nice demo track made with the Lambda ES50.
by
wwwPepeMusicDE
BrochurePDF of 1980 Korg Brochure, submitted by Niels Kloes
ManualDownload the original owner's manual from SoundProgramming.net.