The Solton K160 was developed and produced by Italian company Ketron Laboratories. It's a very simple and cheap, 8-voice digital-analog hybrid preset synthesizer, circa 1990. The sounds are generated by digital oscillators, but the rest of the instrument is analog – there are eight CEM3389 chips inside.

The instrument is built in a cheap plastic body with a metal strip around the tiny LCD display and some buttons on the top. The keyboard has 61 velocity sensitive keys, there are Pitch Bend and Modulation wheels (awkwardly located at the very top), and separate Volume and MIDI Volume sliders (the K160 can control the volume of a MIDI slave instrument in realtime). On the rear side, there is MIDI, Left & Right outputs, Phones output, Pedal input (called "Release Pedal" here) and two knobs for tuning and LCD brightness adjustment.

In the K160's ROM, there are 4 banks with total of 128 sounds called Presets, including various kinds of sounds like pianos, e-pianos, strings, brasses, organs, guitars, basses, etc. Of course, the acoustic sounds are obsolete by today's standards, but some Preset sounds are still good: the pipe organ emulation is impressive and better than on many of today's keyboards. However, the Presets can not be modified.

In the RAM, there are 32 performances, called Programs, which can be modified or completely created by the user. Each Program can include up to 8 Presets freely layered or split across the keyboard. The following parameters can be set for each Preset in a Program: Dynamic allocation (the number of oscillators per Preset), Bank and Preset number (you can use Presets from only one Bank), Lower and Upper limit, Note shift (by semitones), Volume, Portamento speed, Velocity to VCA (touch response, only On/Off), Filter Cut-Off, Resonance amount and output assignment. You can also assign the MIDI channel for each Preset in the Program. The K160 came from the factory with 32 Programs which can be restored using the Factory Setup. The user's Programs can be saved by memory dump to an external storage device like a sequencer. There are no internal effects. 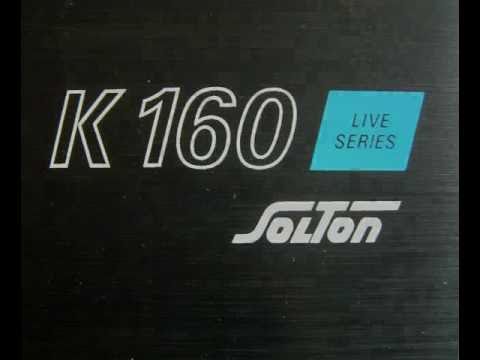