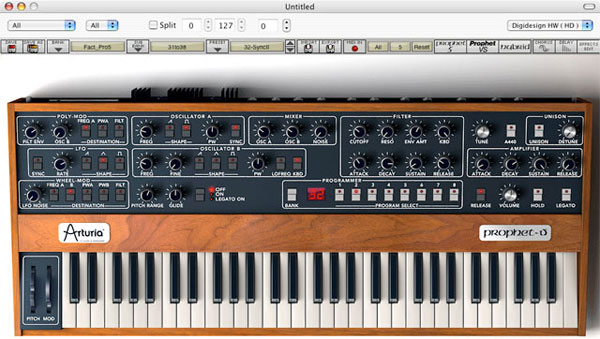 Arturia's Prophet-V offers something no other major soft synth maker has with respect to the classic Prophet synth emulators. The Prophet-V offers two of Sequential Circuits most groundbreaking instruments in one complete package: The analog king Prophet 5 and the vector based ProphetVS synthesizers. What's even more delicious about the Prophet-V, is that these two divergent synthesis systems can be combined into a Hybrid mode allowing for Prophet-like sounds never before possible with previous software emulations or even the original vintage machines - at least not at this affordable price or in such a convenient and intuitive package! Available as a stand-alone and plug-in soft synth for Mac and PC, the Prophet-V supports VST, DXi, Audio Units, RTAS, ASIO and Core Audio.

First we'll examine the Prophet 5 emulation. Arturia uses their TAE (True Analog Emulation) synthesis to offer a true replica of the classic Prophet 5 - one of the first polyphonic programmable synthesizers of its time. The sounds are classic seventies analog: warm, gritty and unique. The interface looks nearly identical to the original, and offers the same basic subtractive synthesis that should be familiar and intuitive enough to any musician who's been around an analog synth. Like the P5, it has two oscillators (A: saw & square; B: saw, triangle, square) with pulse-width and noise and individual mixer controls. A 24dB/oct (self-oscillating) filter with cutoff, resonance, env amt, kybd tracking, and ADSR controls. An amplifier with ADSR. An LFO section with saw, tri and square wave shapes and a rate control. Sequential's Poly-Mod section, Wheel-Mod section, Legato - all 54 parameters of the original Prophet are here. Arturia tried so hard to remain true to the original that the Prophet-V ships with the original factory Prophet 5 patches - all 40 of them - loaded into its memory. Arturia's new features include just a monophonic Unison mode, a Sustain feature, plus Chorus and Delay effects (and of course, unlimited patch memory along with a bunch of additional patches programmed by renowned sound designers).

Sonically, the Prophet 5 emulation is spot on! The original P5 has a very unique sound, due to the age of its components and the nature of its chips that were available during its production. They sound warm but also, sometimes, a little thin or lacking in the meat department. But because of a P5's age, they are prone to having dirty or distorted artifacts, noisy pots, flaky buttons that may or may not work, dead keys on the keyboard, and a tendency to drift out of tune the more it warms up. All these may add up to "character," but in a real world scenario, they can be a burden. This is where the Prophet-V comes in, with a sound quality that is unmistakably Prophet, but without the "age" in its sound or interface. This is one Prophet that will remain in tune and will never let you down in the studio or on stage (unless of course your computer crashes). Due to the outrageous prices and rarity of vintage P5s, the Prophet-V is an excellent way to add the sounds and the feel of using and programming one to your synth studio - the Prophet 5 emulation alone is worth it, rivaling and in some ways out-doing competing soft synth replicas of the P5! 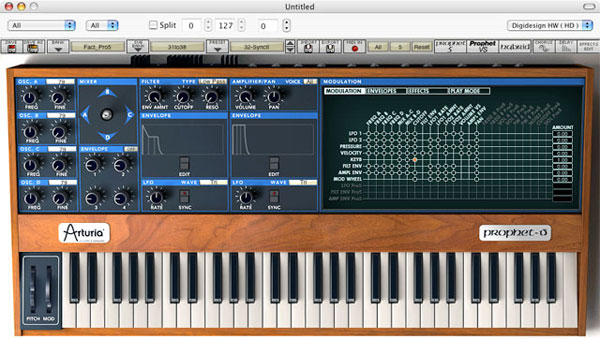 Next up is the ProphetVS emulation, one of the few places where you can find this form of synthesis in a software synth. Briefly, the ProphetVS was a ground breaking synth for Sequential that uses digitally stored waveforms in a table, which are freely selected and blended together (usually with a joystick) by the user. This synth came out right at the same time that Sequential went out of business, so the original machines are quite rare and sought after. Their technology, however, went directly into the Korg Wavestation series and also the Waldorf Microwave series.

So, back to the Prophet-V. Actually, the ProphetVS is not visually replicated here, in fact the Prophet-V looks almost nothing like the original. But that's a good thing, the original had a very primitive and counterintuitive interface, which has been remedied here, some 20 years later by Arturia. There are the same 96 digitally sampled waveforms of the original ProphetVS here, and you can choose up to four of them for your sound. You can see a graphic representation of each waveform as you browse through them while assigning them to each of the four oscillators. Frequency and tuning for each osc can be adjusted. Then there is the Vector-based joystick, which is basically the mixer that lets you adjust how much of each waveform will be heard - the interactions of the various waveforms you choose will yield interesting but almost entirely unpredictable results - experimentation is the name of the game!

There are few other basic synth functions including a filter which can be set to Low Pass, High Pass, Band Pass, or Band Reject modes, with cutoff, resonance and env amount controls. The filter has a 5-point envelope that can be drawn for unique shapes. The amp section offers volume and stereo pan controls for all voices or each of the five separate voices independently (this can allow for some awesome stereo sounds). The Amp also has a 5-point envelope that can be drawn, just like the filter. All envelopes are shown as graphic representations of their shape. There's also two simple LFOs with tri, saw, square, ramp and random waveforms and a rate control. The complex modulation capabilities of the original ProphetVS are greatly simplified in Arturia's graphically displayed Modulation matrix section, where you can intuitively assign a Mod source (LFOs, pressure, velocity, envelopes, mod wheel) to a destination (osc frequencies, osc mix amounts, filter cutoff, env, LFO rates, volumes, panning, etc.). This allows you to create far more dynamic sounds that can move around in stereo, evolve over time, undulate, vibrate and morph - all in a manner much more easy to understand and execute than on the original machine. In addition, Arturia has added some new features to the ProphetVS such as chorus and delay effects, and unison and legato modes. Oh, and in case you have not already figured it out, the Prophet-V sounds as close to the original instrument as any modern day computer based software instrument can, thanks to Arturia's excellent TAE synthesis. 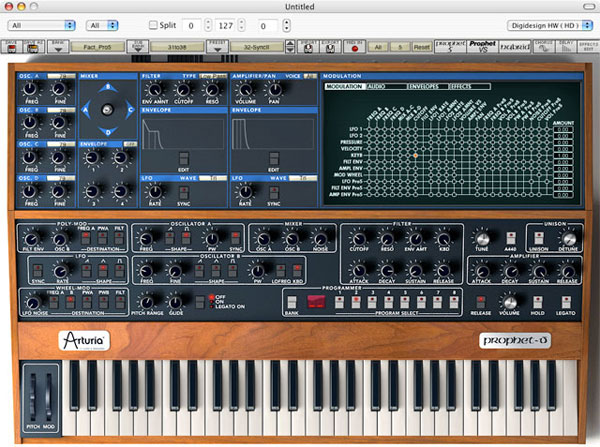 For the low, low price of this software package, this is an unbeatable way to acquire pretty much everything the classic Sequential line of synths had to offer. And even though each of these two emulations are amazing on their own, let's not forget that Arturia has allowed us a Hybrid mode where you can join the Prophet 5 and the ProphetVS together into a monster synth! This is where sounds that you never thought possible from a Sequential start to emerge. While the two synths are still independent of each other, they are joined via the Modulation matrix and an audio mixer. So in the Mod matrix you can actually modulate P5 parameters through some of the PVS' mod sources, and likewise some of the PVS' parameters can be modulated by some of the P5's mod sources. The stacked hybrid also shares the same chorus and delay effects as well.

Out of the box, the Prophet-V comes with original factory patches for the P5 and the PVS. There are additional programmed sounds for each instrument and there are a bunch of programmed sounds for the Hybrid mode, for over 500 programs out of the box! Import of MIDI sysex from original P5 and PVS synths is also supported so you can load in your own custom patches from the real synths or from the plethora of patch files available from libraries and the internet. Patches are organized by synth type and sound type and there are convenient blank template patches to get you started programming your own personal sounds. The Prophet-V supports up to 96kHz for superior digital sound quality, and with no aliasing from 0.1 Hz up to 16kHz. Polyphony is also up from the originals (the P5 had 5 voices, the PVS had 8 voices) supporting from 2 up to 32 voices. For its price, the audio quality, intuitive interface, emulative accuracy, and expanded abilities and possibilities, the Arturia Prophet-V is an amazing instrument that belongs in every musician's computer, and is definitely worth checking out before choosing to throw down two times or more money on an unreliable original vintage version - unless of course "character" is all you're after. 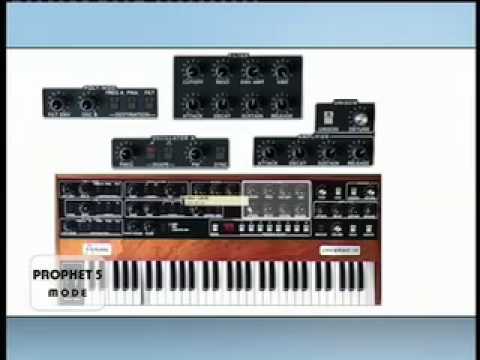 Prophet V
by
Arturiaweb
Audio Clip 1 A little noodling with the Prophet-V. First is a Prophet 5 lead patch, then a ProphetVS bell sound, then a Hybrid Pad and Hybrid Arepggio.
Download DemoVisit Arturia's website to download a free demo and try it out for yourself!