The Cruise was a synthesizer released in 1981 by the Italian Organ makers at Siel to the Italian and European markets. However, it made its way to the USA’s shores when Sequential Circuits, who really wanted to add a compact mono+poly synth to their own product line but lacked the resources to do it on their own, worked with Siel to release their own re-branded and re-painted version of the Cruise known as the Sequential Fugue. In true Italian style, the only difference between the two, was that the Cruise looked good!

The Cruise is two synths in one, combining what is Siel’s Orchestra and Mono synthesizer models into one powerful synthesizer! It features two discrete synthesizer modes or sections: Mono Synthesizer and Poly Synthesizer. The front panel has a lot of graphical information printed on it to clearly designate the Mono section functions from the Poly section features, as well as signal flow charts to help the user understand how the sounds are internally routed. In the middle of the synth is the ‘Masters’ section. This holds master volume sliders for the Mono and Poly synth sections and keyboard split mode options. The keyboard can be split in the middle, and either section of the Crise can be assigned to either split. When not split, the Mono and Poly sounds are played at the same time (assuming both sections are turned on—there are enable buttons for each section), except the Poly sounds are polyphonic while the Mono sounds will follow the low-note or high-note priority setting. There are also separate outputs for the Mono and Poly sections too.

The Mono section is a monophonic synthesizer driven by one digitally controlled oscillator (DCO). There are two synthesis modes for the Mono section: Preset or Free. In Preset mode, you can select from Bass Tuba, Trombone, Trumpet, Flute, Picolo, Sax, Clarinet, Violin, Bass and Guitar. In Free mode you have basic waveforms to choose from including sawtooth or square waves in various octave ranges. Sound shaping controls include ADSR envelope, VCF cutoff and resonance, and Vibrato depth and speed. The Pitch-Bend and Portamento controls left of the keyboard are only for the Mono synth section. The Mono section is great for creating bass and lead synth lines.

The Poly section is a fully polyphonic string machine, accomplished using the typical octave divide-down technology used in other string/orchestra machines. There are four basic sound sections: Brass, Strings, Piano and Accordion/Organ. The Brass section has Trumpet and Trombone presets with independent attack (‘Crescendo’) and filter (‘Resonance’) controls. The String section has Cello and Violin presets with an attack slider labeled ‘Percuss’. The Accordion/Organ section has Accordion, Organ and Celeste presets. The Piano section has three presets including a Honky Tonk piano. A nice touch is the sound Preset selectors are colored green, while the modifiers are colored red. With all the sounds from these four Preset sections, you wind up with a total of 10 preset sounds, which can be combined freely. The only drawback is they can not be mixed separately—they are either on or off. Additional features of the Poly section include the Poly Controls: Brass Attack, Brass Cutoff, Strings Reed Attack and Strings Piano Decay—these are all very basic envelope and/or filter modifiers for a couple of the sounds. There is also the ‘Animator’ effect which is kind of a chorus-tremolo-LFO effect. Naturally, the Poly section is best at creating classic 70’s String Machine sounds.

The Siel Cruise is a really interesting instrument. It helped Siel branch out of the Organ building business and into synthesizers. Besides the Sequential Fugue version, the Cruise’s two sections were also available as separate synthesizers from Siel—the Orchestra and the Mono. The Cruise’s Poly section, the Orchestra, was also released in the USA by ARP as the Quartet. So there is plenty of this synth to go around under various names and forms out there. It is quite capable of some really nice Mellotron-like strings, a fair good piano, though the single-oscillator driven Mono synth is a bit slim due to being a single oscillator, but still quite capable of decent bass and lead sounds. 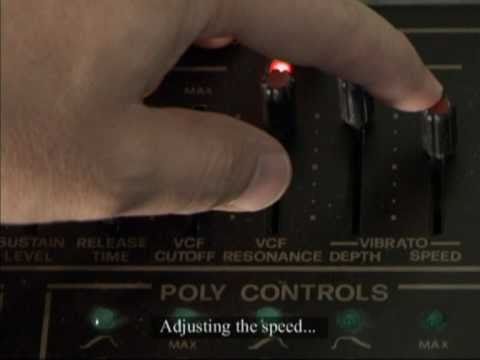 Original images from Ebay via Synthfind

Thanks to Michael Schneider for providing help.