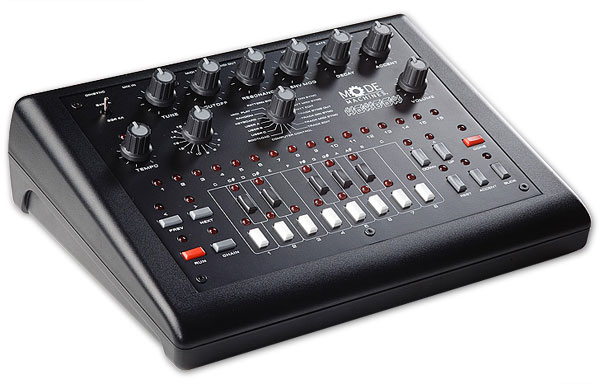 The x0xb0x, pronounced "zox--box", is one of numerous wannabe clones of the famous acid giant, the Roland TB-303. The x0xb0x however, is better than so many of its competitors. Originally, and currently, sold as a DIY kit by Ladyada, the x0xb0x began life as a graduate student's quest for the perfect TB-303 sound. Ladyada reverse engineered a real TB-303, part by part, and designed a clone that sounds very nearly identical to the TB-303. The kits are extremely popular, so you can expect to wait for some time on their waiting list before one becomes available for sale. Third party companies have also sprung up that offer pre-built x0xb0x synths, the most popular of which is Mode Machines in Germany.

The x0xb0x panel looks pretty much like what you'll find on a TB-303. Emulation is the sincerest form of flattery, and the x0xb0x is trying hard to flatter, but with some modernizations. The x0xb0x is a monophonic synthesizer that you can control via MIDI just like a regular monophonic synth. It also has the requisite sequencer that arranges notes into patterns, and patterns into tracks for a song. Patterns can be synced to MIDI, DINSYNC, and CV. You can also enter the tempo by using tap-tempo. Track play can also sync in a similar fashion. And the x0xb0x can also send sync information to a MIDI sequencer or even an old analog.

The x0xb0x has a USB jack that be used to connect it to a computer for updating the firmware and operating system, external control, as well as using it with third party software tools. 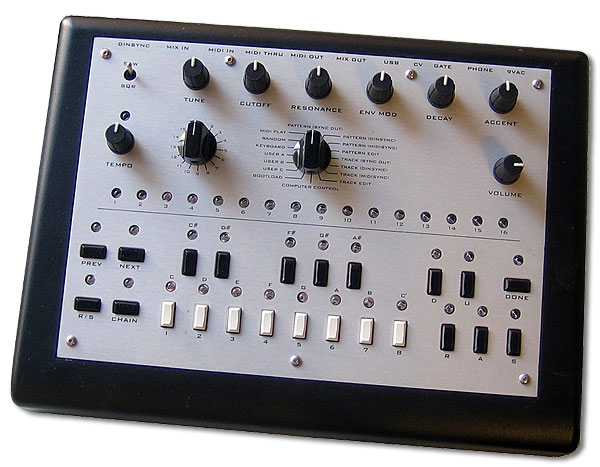 If you are interested in building your own x0xb0x, be prepared to build a fairly advanced electronics project. This is not a beginner's project, but if you have some soldering experience and feel safe around electricity, you can probably build one successfully. You can order the x0xb0x with or without the miniature surface-mount USB jack and chip pre-soldered (it is advisable to pay for this option). And of course, you can customize the machine to your heart's content. There are many sites on the internet that showcase various x0xb0x customizations. You can also find third party companies that sell custom panels for x0xb0x builders. 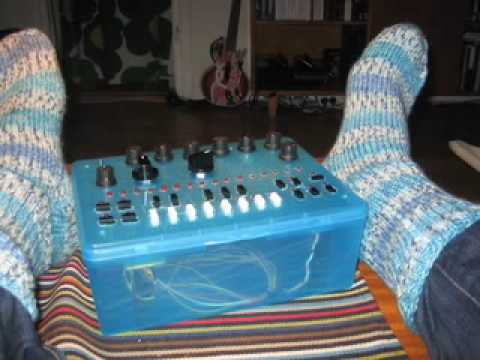 Making of an x0xb0x
by
lesingemonotone

Images from x0xb0x: Tranistorize the World.