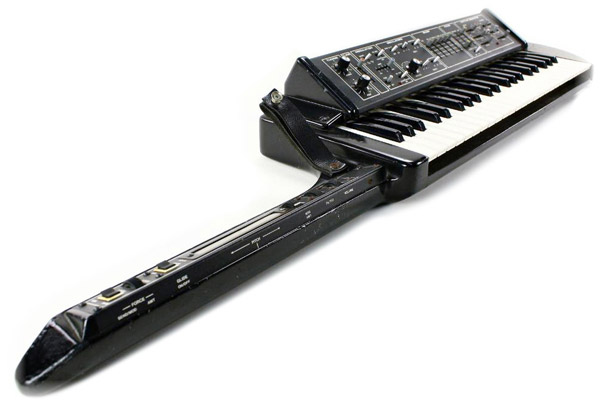 The Liberation was Moog's unique strap-on keytar style portable performance synthesizer. Being a dual-oscillator monophonic analog synth it is often considered comparable to Moog's other two-oscillator synths such as the Rogue or Concertmate MG-1, but in actuality the Liberation is most similar to Moog's most popular dual-vco synth, the Prodigy. The actual synth controls of the Liberation are nearly identical to the Prodigy, with the addition of Ring Mod, Noise and Polysynth controls in the Mixer section. The Liberation also uses sliders and toggle switches instead of the Prodigy's knobs and slide switches.

The Liberation is fairly simple to use and has that unique monophonic Moog sound. Its two analog oscillators are combined to produce a monophonic, single-note output. Each oscillator features sawtooth, triangle and square shapes (waveforms can be selected independently on each VCO) adjustable over three octave ranges each, and they can be mixed together to produce a variety of tones. There is also a simple polyphonic section that can be useful for playing organ-type sounds. There is the traditional 24 dB/oct Moog filter section with its own cutoff, resonance (emphasis) and envelope controls (attack, decay/release, sustain), and a Loudness amp with attack, decay/release, sustain envelope controls. Some other nice on-board features include a Ring Modulator, Noise Generator, and syncable VCO's. But one of its great features is its ribbon controller, located in the hand-grip portion of the synth which can be used for pitch bending and modulation effects.

If you're looking to perform with a cheap (by Moog standards) analog synth strapped on like a guitar then the Liberation should be right up your alley. Otherwise there's always the Prodigy, a long time staple of electronic musicians. The Liberation has been used by 808 State, Apollo 440, Devo and Kool and The Gang. 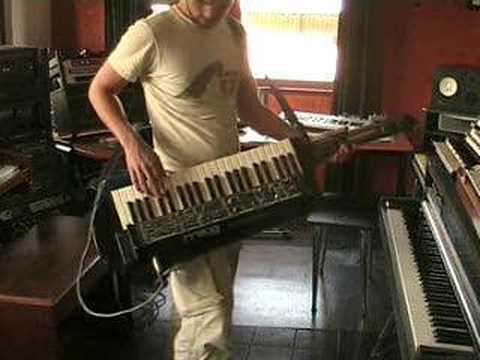 Moog Liberation, Is It Dope? A player jams a bit and shows off the Liberation and what it can do.
by
epservice
Audio Clip 1 These sounds are from the MG-1 which is basically the same as the Liberation.