The ASR-10 stands for the Advanced Sampling Recorder - a completely digital music production studio. It's a 16-bit sampler that came in both keyboard and rack-mount versions. It shipped with 2 MB of sample memory which could be expanded to 16 MB for a few minutes of stereo cd-quality sampling time. It lets you choose from sample rates of 30 to 44.1 kHz and has all the professional sample editing functions you would expect to find from a pro sampler including autolooping, volume smoothing, normalize, crossfading, and time comp/exp. Even resampling through its effects, EQ, etc. is possible!

What's special about the ASR-10 is that it is a sampler using the synthesizer architecture of Ensoniq's classic line of synths from the SD-1 to the ESQ-1. Your samples are stored as part of its WaveSample memory. The ASR-10 can hold 127 WaveSamples, which can also consist of its two multimode digital filters, the LFO, one random noise generator, three envelope generators (hard-wired to the pitch, filter cutoff, and amplitude), and a modulation matrix with 15 routable modulation sources. Up to eight layers of WaveSamples can be combined to create your final sound. In this light, the ASR-10 basically looks like an advanced TranseWave (waveform modulation) synthesizer in which YOU create its WaveSamples!

The ASR-10 integrates a digital effects processor and MIDI sequencer on-board for a complete workstation. There are up to 62 effects (including vocoding) based on Ensoniq's DP/4 effects processor. A whole range of reverbs, chorus, flange, phaser, distortion, digital delay, speaker effects, etc. are available.

The ASR-10's sequencer has 16-tracks and with its 31 voices of polyphony you can create some pretty complete musical performances. The sequencer (reminiscent of the SD-1 and VFX-SD workstations) provides real time and looped recording modes, 96 PPQ clock resolution, an auto-locate function, punch in/out, and other useful features. And the ASR-10 can sample while the sequencer is playing. It can store up to 80 sequences or patterns which can be chained into a song (only one song can be in memory).

The ASR-10 also has a "Tape Recorder" mode in which you can record two tracks of audio for use along with the sequencer for an advanced all-in-one music making machine! Recording can be to its RAM or to external SCSI hard drives via the SP-3 SCSI interface (optional on keyboard version) for extended sampling/recording time and memory. It can support up to seven simultaneous hard disks and/or CD-ROM drives. You can even process external audio through the ASR, live or along with sequences.

As mentioned, the ASR-10 comes in a 61-note keyboard version and a rack-mount. But there's more. Over the years Ensoniq has continued to upgrade it adding an AES/EBU digital I/O upgrade, digital audio recording and importing of new sound formats, and more. The ASR-88 version is an ASR-10 with a fully-weighted 88-note keyboard and the SCSI interface comes standard. The ASR-10 is compatible with Akai (S-1000/1100) and Roland CD-ROM sound librarys. A high-density (HD) 3.5" disk drive comes standard on all models. The ASR-10 has been used by Atomic Babies, Autechre, Rammstein, Jimmy Edgar, Black Lung, Rabbit in the Moon, Timbaland, Pharell Williams (Neptunes), The Alchemist, Kanye West. 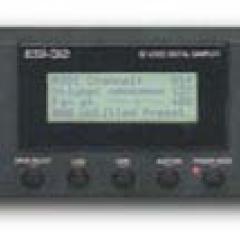 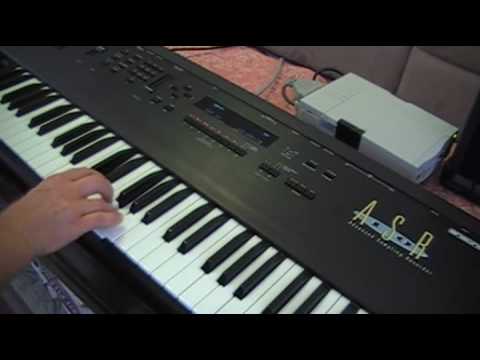