The Proteus 1000 is a slimmer and more affordable version of the Proteus 2000 rack module (and that also includes the Proteus 2500 too). Polyphony is cut down from 128 to 64 voices. It offers the same 32 MB "Composer" soundset as found in the Proteus 2000 and 2500. But the Proteus 1000 has just one additional soundset expansion slot where the other Proteus's have four slots. So total memory can only be expanded to 64 MB, and you can only choose one of the eleven Soundsets in E-mu's current library of genre based sound modules, desktop groove machines and keyboards.

The Proteus 1000 is aimed at bringing you the Proteus sounds in an affordable module. So its four assignable real-time control knobs are adequate, but nothing compared to the 16 knobs on the 2500! Cost is also reduced by offering just a stereo output and no digital output. The MIDI processor is the same as in the Proteus 2000, but is only 16-part multitimbral instead of 32-part. The Proteus 1000 makes a great entry-level sound module as it provides the full gamut of general synthesizer sounds and is quite affordable. Serious musicians would prefer the more flexible Proteus 2500 (or even the Proteus 2000) to the 1000 simply for the multiple outputs and increased polyphony and sound expansion options. 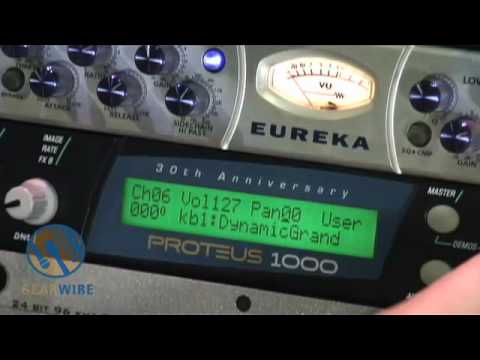