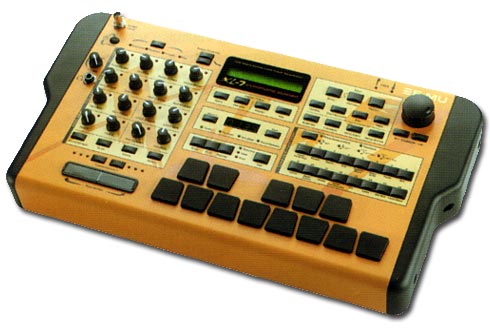 The hot new XL-7 is a desktop sequencer module version of E-mu's Xtreme Lead-1 Electronica and Dance oriented sound module. You may recall that the Xtreme Lead-1 module itself was a new and improved Techno synth based on the popular Audity 2000 module. Like the Xtreme Lead-1, the XL-7 uses the same sample-playback synthesis engine as E-mu's Proteus 2000 sound module. The XL-7 and all its Electronica synth sounds and beats can also be found in a sleek keyboard version called the XK-6 Xtreme Keys.

Sharing its sounds and specs with the Xtreme Lead-1, the XL-7 has 128 voices of polyphony like the Xtreme Turbo. It ships with one 32 MB ROM soundset called "X-Lead" and it is full of brand new and classic electronica, techno, house, dance type sounds from basses and synths to drum kits, scratches, vocal effects and more! The XL-7 has 3 additional slots for adding more, up to 128 MB, of E-mu's 32 MB ROM soundsets from E-mu's family of genre based sound modules, keyboards, and desktop groove machines.

What sets the XL-7 (and the MP-7 Urban/HipHop version as well) apart from its sound-module and keyboard versions is its built-in MPC-style sequencer. If you find the rack-mount sound modules too constricting to work with, and don't have room for another 61-note keyboard, the desktop sequencing all-in-one Command Station may be what you need. There are 13 large velocity and aftertouch sensitive pads which can be used to play notes, chords or drop in drum sounds. Sequences can be recorded in real-time, step input, or grid-styled classic TR drum-machine style programming. Patterns can be up to 32 bars long each, there is quantization, overdubbing features, and synth parameters can be automated in pattern and song modes. There are 16 front panel real-time controllers for automating parameters in your tracks, or just for easy hands-on access to programming your sounds. Mute/Enable Track buttons allow you to add or remove patterns on the fly. The sequencer has full-blown MIDI implementation as well, supporting up to 32 MIDI channels. Use the XL-7 as a sound module or sync it up to other MIDI equipment. You can control its built-in sounds and external devices simultaneously! Many rhythmic synth parameters (LFO, envelopes) are Tempo/MIDI syncable too. There's even a cool real-time assignable touch strip ribbon controller. Unfortunately, the sequencer stores up to 1024 patterns and 512 songs.

Other great features it shares with its sister sound modules and keyboard versions include 32 simultaneously available arpeggiators with all the basic patterns plus up to 300 preset and user patterns! Two effects processors offer up the standard batch of reverb, delay, chorus, flange and distortion, and there are also digital 12 pole resonant filters. There are six outputs and a digital S/PDIF output, USB port, and a new BNC 12V lamp socket for lighting up the unit while using it on stage or alongside the DJ's turntables! The XL-7 gives musicians and DJs alike an MPC-style take on working with the proven sounds of E-mu's genre based Dance synths!

Audio Clip 1 XL7 Demo. A cool and slow funky groove showing off some of the XL-7's sounds.